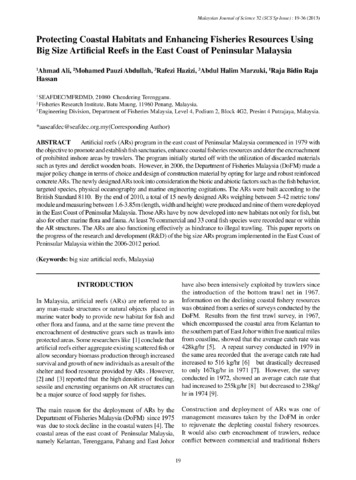 Artificial reefs (ARs) program in the east coast of Peninsular Malaysia commenced in 1979 with the objective to promote and establish fish sanctuaries, enhance coastal fisheries resources and deter the encroachment of prohibited inshore areas by trawlers. The program initially started off with the utilization of discarded materials such as tyres and derelict wooden boats. However, in 2006, the Department of Fisheries Malaysia (DoFM) made a major policy change in terms of choice and design of construction material by opting for large and robust reinforced concrete ARs. The newly designed ARs took into consideration the biotic and abiotic factors such as the fish behavior, targeted species, physical oceanography and marine engineering cogitations. The ARs were built according to the British Standard 8110. By the end of 2010, a total of 15 newly designed ARs weighing between 5-42 metric tons/ module and measuring between 1.6-3.85m (length, width and height) were produced and nine of them were deployed in the East Coast of Peninsular Malaysia. Those ARs have by now developed into new habitats not only for fish, but also for other marine flora and fauna. At least 76 commercial and 33 coral fish species were recorded near or within the AR structures. The ARs are also functioning effectively as hindrance to illegal trawling. This paper reports on the progress of the research and development (R&D) of the big size ARs program implemented in the East Coast of Peninsular Malaysia within the 2006-2012 period.