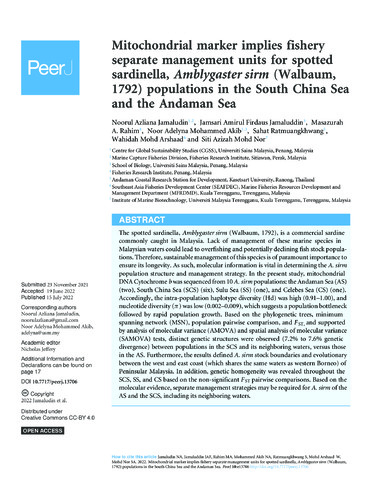 The spotted sardinella, Amblygaster sirm (Walbaum, 1792), is a commercial sardine commonly caught in Malaysia. Lack of management of these marine species in Malaysian waters could lead to overfishing and potentially declining fish stock populations. Therefore, sustainable management of this species is of paramount importance to ensure its longevity. As such, molecular information is vital in determining the A. sirm population structure and management strategy. In the present study, mitochondrial DNA Cytochrome b was sequenced from 10 A. sirm populations: the Andaman Sea (AS) (two), South China Sea (SCS) (six), Sulu Sea (SS) (one), and Celebes Sea (CS) (one). Accordingly, the intra-population haplotype diversity (Hd) was high (0.91–1.00), and nucleotide diversity (π) was low (0.002–0.009), which suggests a population bottleneck followed by rapid population growth. Based on the phylogenetic trees, minimum spanning network (MSN), population pairwise comparison, and FST, and supported by analysis of molecular variance (AMOVA) and spatial analysis of molecular variance (SAMOVA) tests, distinct genetic structures were observed (7.2% to 7.6% genetic divergence) between populations in the SCS and its neighboring waters, versus those in the AS. Furthermore, the results defined A. sirm stock boundaries and evolutionary between the west and east coast (which shares the same waters as western Borneo) of Peninsular Malaysia. In addition, genetic homogeneity was revealed throughout the SCS, SS, and CS based on the non-significant FST pairwise comparisons. Based on the molecular evidence, separate management strategies may be required for A. sirm of the AS and the SCS, including its neighboring waters.